One Day It'll All Be Different

I recently finished printing out the latest draft of the book I've written. It's the book that's kept me away from the blog. It's a novel-length collection of thirty-two short stories and I've given it the working title, One Day It'll All Be Different. It's the title of one of the stories in the collection and also a line from a visual poem I made a while ago and which I've used as a cover for the draft. Thanks are due to The Weaver of Grass for helping me with the proofreading.

A few of the stories were written earlier, but the vast majority have been written over the last eighteen months.They explore  time, memory, the way we create the worlds we live in and the unknowability of other people. Suitable themes, you might think, for a pandemic lockdown. I was about to say that, despite that, I wouldn't describe it as a work of 'lockdown fiction', but as soon as I began to type out this thought I began to question it. None of the stories feature the pandemic, the characters meet freely, travel the country and explore their environments. However, the very things they do are the very things lockdown leads one to think about and perhaps yearn for. Several of the stories, too, involve characters becoming immersed in the topography of their immediate surroundings. This, I think, has also been one of the less unpleasant themes of the pandemic for a lot of people. So, is it a work of lockdown fiction? Perhaps it's not for me to say.

One of the great things about writing short stories is that, because they're short and self-contained, you can be bold. If you have an idea, explore it. Why not? In two or three thousand words' time you'll be doing something else. Short stories can be a liberation not only for the writer but also for the reader. Not enjoying the narrative? Don't worry, in a few pages you'll be embarking on a new one.Very occasionally (but, be reassured, if such things are not to your taste, not too often), it might lurch away from literary fiction into a hauntological world drawing on the tropes of fantasy or science fiction.

It's a good feeling, getting it printed out. I've obviously backed it up but, even so, it's reassuring to see the thing on paper and feel its weight in my hand. I did a word count (well, the computer did) and it weighs in at 56,789 words. What are the chances of that? 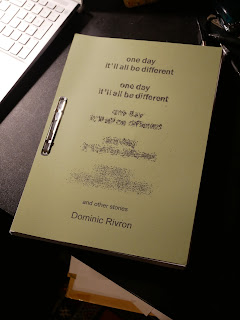 On a different note, I'm currently reading The Voyage Out by Virginia Woolf. You have to be wary of taking to heart the judgements of others. I'm thinking here of critics and how we read and, if we write it, write criticism. It's so easy when reading to take on board the opinions of the writer, particularly, I think, when the idea in question is presented as a casual aside. With The Voyage Out, it being her first novel. when critics write about it they seem to feel almost obliged to damn it with faint praise. One is left with a mental image of a rather stodgy, flawed first novel that's nothing like as good or as interesting as her later work. Added to which it's pretty thick.
Being a Woolf fan and having read almost all her later novels, actually reading it for the first time is proving to be a pleasant surprise. A young impressionable woman (a bit like Woolf herself) goes on a sea voyage with members of her family. They find themselves joined, briefly, by a Tory MP, Richard Dalloway, and his wife Clarissa. Richard turns out to be an egocentric sexual predator. I found that episode quite disturbing and was left wondering what Woolf would've made of his modern counterparts.
It's not all dark, though. On the contrary, so far I'm finding it one of the most humorous of Woolf's books I've ever read. For example:

Mr. Pepper went on to describe the white, hairless, blind monsters lying curled on the ridges of sand at the bottom of the sea, which would explode if you brought them to the surface, their sides bursting asunder and scattering entrails to the winds when released from pressure, with considerable detail and with such show of knowledge, that Ridley was disgusted, and begged him to stop.

"It’s the philosophers, it’s the scholars,” [Richard Dalloway] continued, “they’re the people who pass the torch, who keep the light burning by which we live. Being a politician doesn’t necessarily blind one to that, Mrs. Ambrose.”

“No. Why should it?” said Helen. “But can you remember if your wife takes sugar?”

Outside The Central Café

The other day I found myself in a local town. I'd taken someone to the hospital there for an appointment and had four hours to kill. I&#...