I once suggested carpeting our living room with AstroTurf,  painting landscape murals on the walls and painting the ceiling blue. We could furnish the room with garden furniture, I suggested. Nobody I suggested it to liked the idea - it was,  quite simply,  'not done'.

It's the same in the arts. Did Bach write one Prelude and Fugue?  No.  He wrote hundreds of them. Did Agatha Christie write one whodunnit then follow it up with a Mills and Boone? No.  Did Picasso paint one blue picture and move on? No. He painted them by the barrowload. Of course,  once you've done something once you might want to do it again to improve and develop whatever it is you've done but nevertheless there comes a point when it's time to move on.

In the arts,   it's even often said that 'form is repetition'. The composer John Cage had the right idea,  using chance and indeterminacy to sidestep repetition. However,  not content with doing it once,  he did it over and over again.

To return to interior design. I quite like the idea of sleeping in a large tent pitched in another AstroTurfed room lined bookshelves (for when I feel like reading in bed). A hi-fi in the room could play recordings of ambient  sounds from outside: birdsong,  bleating sheep and so on. I could perhaps choose my location from a selection of ambient recordings. Before you ask,  I could turn the spare bedroom into a 'dressing room' where we could keep our clothes.

I'll never get round to it. Like everyone else I'm too busy leading a repetitive life. We all repeat ourselves.  We even invent timetables to make sure that we do. In fact,  I  wonder if we're capable of doing otherwise?  If not, are we as free as we think we are?

What sort of things would you do if you decided to reduce repetition to a minimum?

While you're thinking about that, it's ten to eleven here. Time to put the kettle on...

They forecast rain. Lots of it. I first realised when I saw J with his JCB thing dropping off a pallet of sandbags in the lane. The village gets flooded regularly, sometimes more seriously than others. We know the routine and when there's a deep depression approaching, people muck in. The year before last, we all had to get our shovels out and rebuild the road.

I've just been and sorted out the conservatory, lifting things off the floor - mainly a pile of cardboard boxes due for recycling. So far we've been lucky - the house has been just high enough up to avoid the floodwater, although the worst flood we ever had came within an inch of the threshold. The conservatory however, built onto the side of the house, is lower than the rest of it and has always flooded at the drop of a hat. It's just one of those things.

Most alarms are false alarms. Hopefully this one will turn out to be one too. What for us is merely having to mop out the conservatory can mean misery, trauma, trashed living areas and insurance claims for people up the road. Not something people need at the best of times - and this, of course, is not the best of times.

We've just been looking through the photos from Mrs C's wildlife camera again. The woodpecker's been back. It caught a shot of a starling, too. There used to murmurate spectacularly over the village but there aren't enough of them around to do it at the moment. 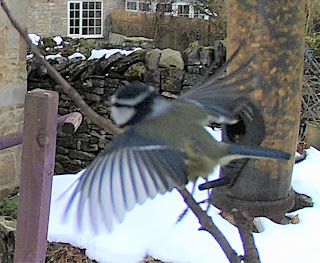 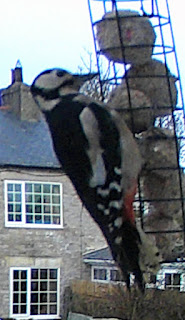 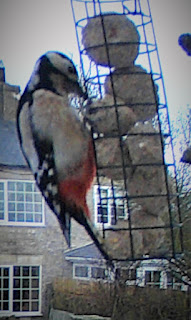 *
Watched this while going for an exercise-bike ride this morning:

A day off. I don't work long hours but even so, it's nice to have a day when work isn't on my mind and I can just freewheel.

The sky's blue. The snow seems to be melting. although the field on the hillside opposite is still an unbroken white.

I did have to unpack the Tesco shopping this morning, We've been getting supermarket deliveries ever since last March. I always wash the packaging in soapy water, which takes time. I guess there are those who do this and those who don't. There is a good case for doing it and anyway, at times like this, everyone needs strategies to preserve some sort of peace of mind.

I usually prop the tablet up on the cooker so I can watch a film at the same time. Today it was Patrick Keiller's film, London. There's short video about it here which, coincidentally, features the 'Tesco's scene' in it. I didn't register the connection when I was watching it this morning, although the scene always amuses me (click once,  then click on 'Watch this  video on YouTube'):

Made in 1994, the film is composed entirely of footage of London, over which a narrator (Paul Scofield) recalls the walks he's taken through the city in the company of his friend, Robinson. Robinson is an interesting character and a mine of information - not all of which, so the narrator tells us, is reliable. It's a powerful film with a thread of gentle, whimsical humour running through it.

I Know Where I'm Going

Actually dared to start looking at possible holiday destinations the other day. We've thought about it before but never actually looked into it. First choice would be a cottage by the sea in Wales. It will need to have disabled access. We looked online and found one or two. It would be nice to get away again. It'll probably be months before we get vaccinated but such thoughts are good for morale. It would be nice, too, to have people stay again. The record (set the year before covid, I think) was seven. All the spare beds were full here. Someone kipped down in front of the fire, another under the piano.

I never thought I'd feel nostalgic about queuing for the bathroom.

It's snowing again. This time it shows no sign of stopping.  It looks to be about six inches deep from what I can see from here, the deepest yet. I've been out a couple of times already to feed the birds but  I've no inclination, though,  to go outside again with a ruler just to verify this!

Watching the snow come and go when you're stuck at home is a bit like watching traffic lights change at night when there's no traffic. I wouldn't say this makes me feel down - rather,  it intrigues me.

North Stoke was talking about Powell Pressburger films.  This is one of my favourites. If I hadn't had any online work to get on with this afternoon I might have sat down to watch it:

I like their unique quirkiness: perhaps the most obvious example in this film being the telephone box next to the waterfall. The telephone box (on Mull,  I think)  exists and has become something of a shrine for Powell Pressburger fans.

There's still snow on the ground. For once, I'm not worried how I'm going to get around. I've nowhere to go. I said in an earlier post how I thought being 'snowed in' was like being locked down but I've come to think it goes deeper than that. Snow creates a 'new normal' all of its own. Sometimes you can still make out the shape of things under the snow, like furniture in an empty house, covered in dust-sheets. Beyond that, all the elements of the outside world have been blanked out and reduced to memory.   Roads have become impassable.

In some countries, white is the colour of mourning. They say this is because it represents purity and rebirth. I keep telling myself this.

Look at it closely though, as we all know, and snow becomes a mass of countless unique crystals. So, white emptiness or crystal garden, what you see depends on how you look. And here, looking out of the window, I can either stare at the blankness or fall back on my inner resources, such as they are.

Mrs C's wildlife camera has produced some intriguing shots of tits flying. Birds stood on the ground or holding on to branches and feeders can look cute. But this is not how they spend most of their time. When they move around, in the air, they do so so fast we can only glimpse them. Capture them with a camera and we begin to see the fantastic world they inhabit.  It's a bit like the snow: it depends on how you look. 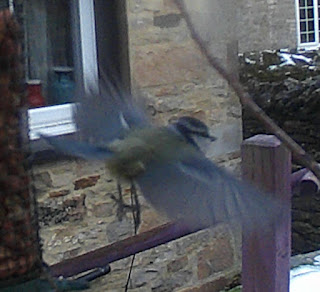 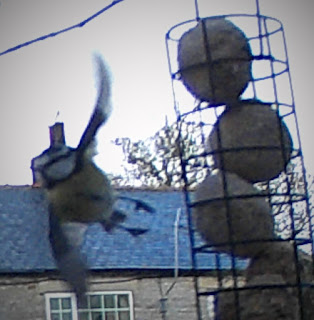 Email ThisBlogThis!Share to TwitterShare to FacebookShare to Pinterest
Labels: Birds

The Mystery of the Missing Trousers

I've been wanting to write a post all day only every time I was about to sit down and start,  something else cropped up! Silly things,  mainly, like losing things and finding them where I least expected to find them.  Putting my glasses down while looking for my mobile only to find myself wondering around in a blurry funk looking for my mobile and my glasses,  in no particular order. At times like that,  when nothing seems to be where it's supposed to be,  I tend to fall back on Sherlock Holmes' method,  which he explains in The Adventure of the Blanched Soldier, one of only two Holmes stories narrated by Holmes himself. I guess I'm not the only one. It's pretty well-known:

"That process,” said I, “starts upon the supposition that when you have eliminated all which is impossible, then whatever remains, however improbable, must be the truth. It may well be that several explanations remain, in which case one tries test after test until one or other of them has a convincing amount of support. We will now apply this principle to the case in point.

It usually works. For example, today,  having hunted round the house for a pair of missing trousers,  In the end I decided, with Holmes' help, that I must have picked them up with a bundle of towels by mistake and stuck them in the tumble drier. I headed for the drier and rummaged around inside it,  hoping to find them. Sure enough they were there.

The Mystery of the Missing Trousers.  Solved.  Elementary, really.

Yesterday was less hectic. We even found time to watch this - Stravinsky's Petrushka performed by the Bolshoi Ballet:

Somebody bought Mrs Carruthers a wildlife camera for Christmas. It's a great present. It's now set up pointing at the bird table. We're still experimenting with the settings and the best time of day to set it running (the light quickly goes in the afternoon at this time of year). Anyway here's one or two shots she's captured with the machine. It's really great to be able to see the woodpeckers close up! 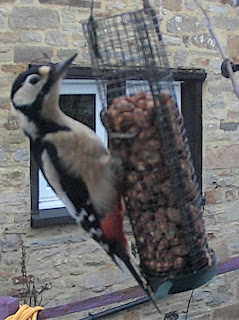 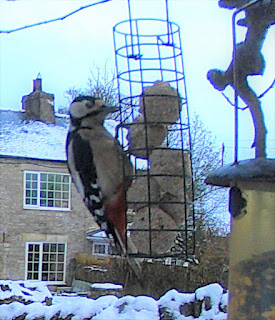 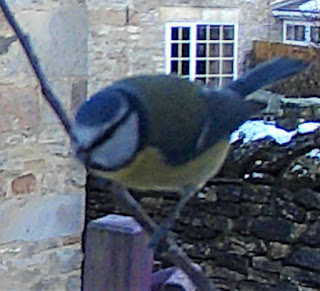 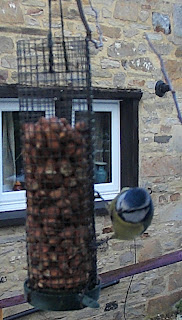 A  fellow blogger brought this up.  Why do we repeat ourselves so much?  Their concern was with repetitive thoughts.  Why do we spend so mu... 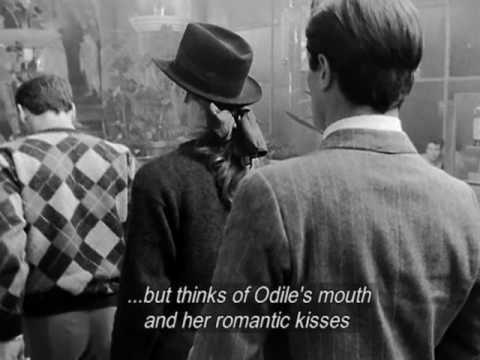