A Walk Around the Garden

I should add that my other half's the gardener, not me (I just do the odd bit of donkey-work).

When we marvel at the latest shots of the Rings of Saturn or the surface of Mars, we're not unlike the Victorian public marvelling at the Great Exhibition, dreaming of a technically-advanced future that lay just round the corner. They couldn't know that the industrial revolution that gave rise to the exhibition would also give rise to two world wars. Like the visitors to the exhibition, what we're shown is the positive side: the wonder, the courage, the ingenuity.

Until now, that is. These days, billionaires seem to be blasting off into space all over the place. The mainstream media sell it as just the sort of thing these larger-than-life characters get up to. Space tourism, it seems, is about to kick off. Something else to add to the bucket-list - if you can afford it.

All very jolly. Okay, it's a bit controversial but not that much. If you want to do business in space it's the obvious place to start. I must admit, seeing Branson and Bezos in their spaceships I couldn't help but be reminded of Clive Sinclair driving around in his C-5. But, in a way, that's what it's all about: setting up a new sideshow in the society of the spectacle.

What's not dwelt on is that the Martian landscapes we see when landers and orbiters relay pictures back to earth could well be turned into quarries worked by robot bulldozers or even test ranges for new WMDs. Space is a free-marketeer's dream. If past experience is anything to go on, when we discover a pristine environment we almost invariably go on to trash it. Once you're up there there's going to be no original people to displace, fewer competitors, no 'red tape' and no inconvenient public to protest against what you're doing. Elon Musk's SpaceX has already said that it doesn't intend to recognise international law on Mars.

Here on earth, as things stand, it's becoming obvious that it's impossible to deal with the climate crisis and continue with a growth based economy. Space, though, is potentially lucrative. Jeff Bezos has said, 'We need to take all the heavy industry, all polluting industry and move it into space, and keep earth as this beautiful gem of a planet that it is.' Behind this positive spin there is the reality that money is power. In the not-too-distant future it may be more easy for entrepreneurs to make their money in space, money that will serve to maintain into the future the power they currently enjoy here on earth. They see space as their best chance to continue with business as usual.

This is the new space race. It's nothing to do with the limits of exploration and everything to do with establishing economic control of the solar system's resources. Again, in the not-to-distant future, we might even see private robot-wars in space as corporations try to stake their claims to mineral-rights, planets and asteroids. I don't think this is far-fetched. After all, in the eighteenth century, the East India Company came to rule large areas of India and exercise military power there.

I'm sure the entrepreneurs see all this very clearly. There's nothing to stop them. And the winners will control the earth.

Email ThisBlogThis!Share to TwitterShare to FacebookShare to Pinterest
Labels: Space

I recently gathered together a few recordings I'd made and uploaded them to Bandcamp. Okay, so free improvised music is a niche genre and somewhere at the back of that niche you'll find another even smaller niche set into the wall: avant-garde free improvised bass guitar solos. It may have as many as twenty fans around the world, most of whom listen to it in the hope that, if they do, the other nineteen might listen to their stuff. Okay, I'm one of them. What the hell...

If you don't like the music, have fun with the track titles and the allusion to the cover art in track 5, which is a bit (but not totally) different to the rest of the album.
By the way, bass instruments just don't come over on tiny speakers in devices. It really needs a good pair of headphones.
at July 06, 2021 7 comments:

I've just been taking a bit of a break from blogging. As I mentioned two or three posts ago, I'm writing a book. It's been going well but I decided I really needed to get my head down and knock out more words. Words going into blog-posts aren't going into the book!

I've recently eased up on myself, though. The other day I wrote this. It actually follows on, I've just realised, from the last-but-one post, so I've included the video I posted then:

I went for a walk this evening, as I often do, over the fields and up the hill opposite the house. It's not one of those big hills, the names of which walkers utter in hushed tones, just a humble bump in the ground, just steep enough at its steepest part to get you breathing heavily. The air was warm and still and the sky a deepening blue with just a scattering of tiny clouds high up, grey tinged with pink.

To get there, I made my way up the lane and along the edge of a field of young Holstein heifers. They were inquisitive and came over to see what I was doing there but, although they came close up to me they shied off when I made any sudden movements. At the end of the field, where the hill begins to steepen, I crossed a stile into a small wood which covers the hillside at this point. I made my way up through the trees by the side of a small beck that mysteriously vanishes underground, soaking into the grass, a few yards from the stile. Half way up, I sat down on its bank and ate a piece of chocolate. I could've sat there for a long time, as it's a magical spot.

From where I sat, I found myself thinking about my surroundings and the many layers of memory and association I laid over it as I looked around. I could see out through the trees to a wire fence and the field beyond it. This was a piece of modern, managed farm-land. The trees had been planted for a reason (there were signs that someone had been rearing pheasants hereabouts in the recent past). Then there was my recent past. I didn't grow up here: I moved here as an adult, out of necessity, never dreaming that I'd stay put for almost half my life. Having experienced 'step' relationships with people, it struck me that, in a way, this place was my 'step home'. So much in life gets changed or modified. Things get broken and then remade. It's neither a perfect nor an imperfect situation. It's just the way it is. Nevertheless, up to moving here I'd never stayed in one place for long. I'm pleased I didn't know I'd still be here now when I moved here all those years ago.

The landscape hereabouts obviously holds all sorts of associations for me now. Funnily enough though, I had not explored this wood until quite recently. I was walking round filming in it only the other week. Over the last three decades, I've often been out for local walks but if I find a route I like I tend to repeat it. I suspect most people are like that. We find comfort and pleasure in repetition. We don't set out to systematically map an area in our minds.

Then there's the less recent past, the times before any of us came along. To get here, I'd walked over the gentle undulations of a medieval field system. Going even further back, not far from here, my stepfather came across a neolithic axe-head.

Watching the film I made in the wood and walking in it afterwards, it struck me how seeing a place depicted lends it an aura which, when you visit it for real, it otherwise wouldn't have. The same effect can be created with other forms of depiction, literature and simply story-telling. It's obvious really - you only have to think of the locations of famous films, images and books. In a way, that aura, though, is only a more intense, striking version of the aura association and memory lend to a place anyway.

And when we think about or visit a place we know, what do we know about it apart from the aura we've created around it in our minds? The significance we ascribe to things isn't out there – it's in our heads. If you strip the aura away, the names we give to the features, the memories, the associations, what are we left with? Roquentin, the central character in Jean-Paul Sartre's Nausea, discovers the answer, looking at the roots of a chestnut tree in the park:

All at once the veil is torn away, I have understood, I have seen.... The roots of the chestnut tree sank into the ground just beneath my bench. I couldn't remember it was a root anymore. Words had vanished and with them the meaning of things, the ways things are to be used, the feeble points of reference which men have traced on their surface. I was sitting, stooping over, head bowed, alone in front of this black, knotty lump, entirely raw, frightening me. Then I had this vision.

It took my breath away.

We recently returned from a holiday in Cumbria. We stayed for a week on a caravan site in Haverigg. The site's situated on the edge of a... 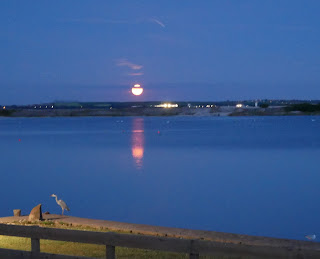