When we marvel at the latest shots of the Rings of Saturn or the surface of Mars, we're not unlike the Victorian public marvelling at the Great Exhibition, dreaming of a technically-advanced future that lay just round the corner. They couldn't know that the industrial revolution that gave rise to the exhibition would also give rise to two world wars. Like the visitors to the exhibition, what we're shown is the positive side: the wonder, the courage, the ingenuity.

Until now, that is. These days, billionaires seem to be blasting off into space all over the place. The mainstream media sell it as just the sort of thing these larger-than-life characters get up to. Space tourism, it seems, is about to kick off. Something else to add to the bucket-list - if you can afford it.

All very jolly. Okay, it's a bit controversial but not that much. If you want to do business in space it's the obvious place to start. I must admit, seeing Branson and Bezos in their spaceships I couldn't help but be reminded of Clive Sinclair driving around in his C-5. But, in a way, that's what it's all about: setting up a new sideshow in the society of the spectacle.

What's not dwelt on is that the Martian landscapes we see when landers and orbiters relay pictures back to earth could well be turned into quarries worked by robot bulldozers or even test ranges for new WMDs. Space is a free-marketeer's dream. If past experience is anything to go on, when we discover a pristine environment we almost invariably go on to trash it. Once you're up there there's going to be no original people to displace, fewer competitors, no 'red tape' and no inconvenient public to protest against what you're doing. Elon Musk's SpaceX has already said that it doesn't intend to recognise international law on Mars.

Here on earth, as things stand, it's becoming obvious that it's impossible to deal with the climate crisis and continue with a growth based economy. Space, though, is potentially lucrative. Jeff Bezos has said, 'We need to take all the heavy industry, all polluting industry and move it into space, and keep earth as this beautiful gem of a planet that it is.' Behind this positive spin there is the reality that money is power. In the not-too-distant future it may be more easy for entrepreneurs to make their money in space, money that will serve to maintain into the future the power they currently enjoy here on earth. They see space as their best chance to continue with business as usual.

This is the new space race. It's nothing to do with the limits of exploration and everything to do with establishing economic control of the solar system's resources. Again, in the not-to-distant future, we might even see private robot-wars in space as corporations try to stake their claims to mineral-rights, planets and asteroids. I don't think this is far-fetched. After all, in the eighteenth century, the East India Company came to rule large areas of India and exercise military power there.

I'm sure the entrepreneurs see all this very clearly. There's nothing to stop them. And the winners will control the earth.

Email ThisBlogThis!Share to TwitterShare to FacebookShare to Pinterest
Labels: Space

Walking up the Hill

I went for a walk up the hill in front of our house today and took a few photos! 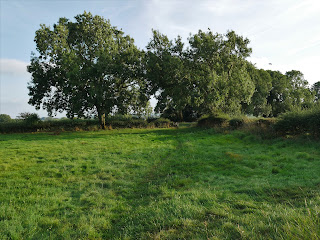