Me and My Trousers

I have always thought of making a big deal about buying a new pair of trousers as being an old man thing. I guess I'm getting old. I've just bought a new pair of jeans and it feels like a major event. It could also be that I've been wearing the old ones since the first lockdown last year. The only times I didn't wear them (apart, of course, from when I was in bed) was when I did the garden and when we went to my son's wedding. I have an even older, more disreputable pair of trousers for doing the garden (and that's saying something) and I wore a suit for the said wedding - although I did threaten to wear my 'lockdown originals' as I'd come to call them in my own mind.

I've been wearing them for so long that taking them off for the last time was a bit of a wrench, almost like shedding a layer of skin. It probably was,  in fact, as they only got washed once or twice. We've been through so much together that I can't bring myself to throw them away. They have historical significance.  As I already have a pair for doing the garden, I've had to create an honorary position for them, as spare gardening trousers, a kind of clothing equivalent of being given a seat in the House of Lords. 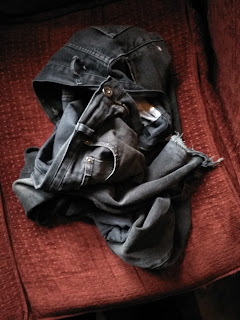 I doubt they'll get used. The bottoms are frayed where they caught on my heels, the belt loops are coming off, the zip's gone (that was the last straw), there's a hole in the crotch and another in the waist. They'd be good for a scarecrow but I haven't the heart to demote them to such a lowly position.
at December 14, 2021

Outside The Central Café

The other day I found myself in a local town. I'd taken someone to the hospital there for an appointment and had four hours to kill. I&#...